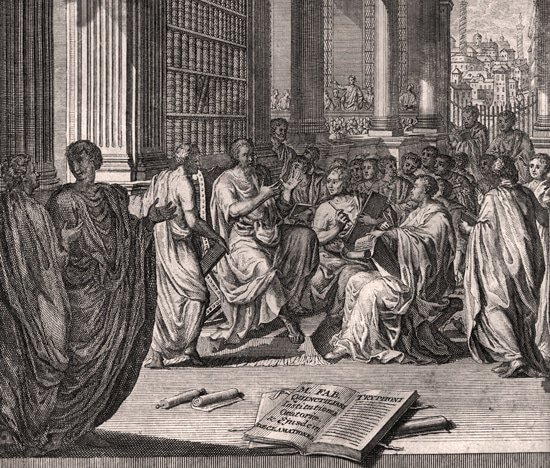 ‘The Defense of Palamedes’ – A Rhetorical Analysis

Plato defined rhetoric, along with its chief proponent, Gorgias, as a shadow discipline, or ‘experiential knack’ (Gorgias, 463c), that is a phantom counterpart to philosophy. In this paper, though, I will look at Gorgias and sophistical argumentation without Plato’s prejudicial lens. This is not a paper about what constitutes sophistry or rhetoric in contrast to the aims of Platonic philosophy. Rather, I will try to assess the intellectual framework and principles of Gorgias’ thought, and consider the efficacy of Plato’s critique.

Protagoras is famous for the claim, “Man is the measure of all things: of things which are, that they are, and of things which are not, that they are not” (Theaetetus, 152a). This claim is often interpreted as an argument for relativism. The epistemological and moral consequences of relativism dictate that whatever an individual believes or thinks to be true, must be true. For example, what makes an act, such as theft, right or wrong, is not rooted in some objective fact in the world; rather, the rightness and wrongness of theft, rests with everyone’s personal beliefs. Moreover, according to relativism, if two individuals, Person A and Person B, believe theft to be right and wrong, respectively, then both Person A and Person B, are, in fact, both correct about what he or she believes, despite the apparent contradiction. As a result of this type of relativist-thinking, the Truth, with a capital T, becomes devoid of any meaning. All that matters, in terms of knowledge, is convincing or persuading, another individual to believe one’s own arguments. To this effect, a great importance is placed on oratory, or rhetorical skills, to convince others in matters of ethics, epistemology, and other areas of inquiry. In The Defense of Palamedes, Gorgias gives a tangible demonstration the power of a skilled rhetorician via Palamedes’ speech.

The story of The Defense of Palamedes, by Gorgias, is that Palamedes is being (unjustly) accused by Odysseus of betraying the Greeks during the Trojan War. The plot of the story consists of Palamedes trying to convince his accusers that he is innocent. The Defense of Palamedes provides an excellent example of the power/role that deductive logic plays in rhetoric and argumentation. For instance, throughout the story, Palamedes employs many deductive logic strategies, such as eliminative deduction, inferences from opposites and contraries, and the effective use of witnesses to try and prove his innocence. Moreover, the argumentative strategy used by Palamedes mainly consists of the use of ‘logos’, which is the appeal to logic, ‘ethos’, which is the appeal to one’s character/credibility, and ‘eikos’, which is an appeal to probabilities.

Gorgias begins Palamedes’ speech having Palamedes establish that he is a relativist. Palamedes begins his speech by stating “Now I clearly know my accuser accuses me without clear ; for I know in my heart clearly that I have done no such thing” (Dillon, 85). In this passage, Palamedes is alluding to the fact that there is no absolute Truth, and thus, no one can ever have clear, irrefutable knowledge of anything – especially his accuser. Palamedes is referring to the fact that, because there is no absolute Truth, what is commonly accepted as knowledge, is nothing more than a series of probabilities. This position regarding the lack of an absolute Truth was clearly influenced by the epistemology of Protagoras.

Palamedes begins attempting to prove his innocence by showing that the premise for the charges brought against him based on ‘speech’, or ‘speaking with the Trojans’, inevitably results in reductio ad absurdum. For example, in section six, Palamedes states:

This passage is an attempt by Palamedes to prove his innocence via reductio ad absurdum. In this passage, Palamedes (for the sake of argument) agrees with the premise that the starting point of his committing treason against the Greeks is ‘speech’, or ‘speaking with the Trojans’. However, from this premise, Palamedes goes on to show that the conclusions that necessarily follow are absurd because they could not possibly have happened. Thus, the argument must be false. Thus, the conclusion that Palamedes committed treason based on the premise that he spoke to the Trojans, is false.

Furthermore, Palamedes attempts to prove his innocence via inferences from opposites and contraries. For example, in section twenty-five, Palamedes states, “You have accused me in the indictment we have heard of two most contradictory things, wisdom and madness, things which cannot coexist in the same man”. In the same passage, Palamedes continues to say, “If, therefore, I am wise, I have not made mistakes; if I have made mistakes, I am not wise. So in either case you would be wrong”. In this passage, Palamedes is showing that the accusation that is being brought against him yields contradictory charges. As Palamedes points out, it is fallacious and absurd for an accusation to yield contradictory conclusions. This is because, logically speaking, contradictions necessarily imply that one of the premises being asserted, or in this case, the accusation, must necessarily be false.

Another deductive logic strategy that Palamedes employs to prove his innocence is the effective use of witnesses. For example, in section eleven, Palamedes states:

For in acting, I had to act either by myself or with others. But this is not work for one man. Then in concert with others? But who? Clearly those with whom I associate. These would have to be free men or slaves, would they not? Well, the free men with whom I associate are you yourselves. Who, then, among you had any awareness of this? Let him speak. As for slaves, is it not incredible that I would use them? For they are prepared to inform both in the hope of freedom and when hard-pressed by necessity.

This passage is an attempt to show the importance and the need for a credible witness to convict someone of an accusation. Moreover, in this passage, Palamedes is showing that even if there were a witness that the prosecution could bring forward, he or she would not be credible because this witness would be biased. Any potential witness that could be brought forward would be biased because he or she would either be a friend of Palamedes, or a slave. Palamedes argues that both friends and slaves would have conflicting interests, and thus, would not be considered a credible witness. Therefore, even if a witness were brought forward, his or her credibility would be in question.

Lastly, Palamedes attempts to prove his innocence using ethos, which is an appeal to his character/credibility. For example, in section thirteen, Palamedes states, “What reason did I have to want to do this, even granting to the full that I had the capability? … Was it to gain absolute rule? … Over you I would have no prospect of ruling”. Moreover, in section fifteen, Palamedes goes on to say “Now someone might say that I have entered on this through a passion for wealth and money. But I possess a modest sufficiency of money, and I have no need of much”. Additionally, in section sixteen, Palamedes states “Nor indeed for the sake of honor would anyone with even a moderate degree of wit set his hand to such an enterprise … I am not in want of honor, for I am in fact held in the highest honor, by the most honorable men”. Lastly, in section twenty-one, Palamedes concludes this appeal to his credibility by stating “Life is not worth living if one loses one’s credibility … So then, that I would not, , betray Greece I have now sufficiently demonstrated”. These reasons given by Palamedes are intended to prove his innocence via establishing his credibility as a good, honorable man. The logic here being that good, honorable men do not commit immoral acts, such as treason or betrayal.

To the untrained eye, the argument put forth by Palamedes appears to be cogent, but upon closer examination, many of the claims put forth by Palamedes to support his conclusion that he is innocent seem to contradict themselves, are devoid of any significance or are just simply fallacious. For instance, the crux of Palamedes’ argument rests on the so-called credibility Palamedes thinks he possesses. Palamedes thinks that, just because he is a credible and honorable person, then it necessarily follows that he cannot, nor has any reason to betray the Greeks. With this assertion of his own credibility, though, Palamedes is contradicting one of his earlier claims: relativism — specifically, moral relativism. If relativism is true, and there is no absolute Truth, ethically or epistemologically, as Palamedes asserts, then the credibility Palamedes is trying to establish for himself, on which his entire argument rests, is devoid of meaning. This is because, though it may be true to Palamedes that he is an individual with high-outstanding moral character since there is no absolute, ethical Truth, another individual may disagree and not think that Palamedes is an individual with high-outstanding moral character. By the essence of relativism, both Palamedes and the individual who disagrees with Palamedes, are correct. If both individuals are correct, then there is a contradiction to what constitutes high-outstanding moral character, and thus, there is no substance to Palamedes’ appeal to his own character to establish his innocence. The ethos Palamedes tries to establish for himself is both valid and invalid, depending on the person who is judging Palamedes, and therefore, are rendered void. Ultimately, Palamedes was found guilty of betraying the Greeks, which shows that his arguments did not hold in a court of law.

For these reasons, among others, the significance of relativist arguments has been highly debated throughout history. One need not look beyond Plato to find a greater critic of the relativist position as established by the likes of the Sophists. In fact, Plato took the Sophists’ ideas so seriously, he had to invent an entirely new, perfect, and unchanging world to establish absolute Truth(s), which served as an attempt to refute the questions being raised by the Sophists and the philosophical positions that the Sophists were taking. Moreover, as Plato’s criticisms point out, the rhetorical and oratory skill of the Sophists are not the same skills a philosopher possesses. The only benefits that can be provided by a mastery of rhetoric and oratory skills are the powers of persuasion. Even the powers of persuasion that rhetoric and oratory skills supposedly offer are questionable, though. This is exemplified by the fact that the prosecution was not convinced by Palamedes’ defense, and found him guilty of treason. All of this shows that the position of ethical and/or epistemological relativism, as put forth by Gorgias in The Defense of Palamedes, which was influenced by the epistemology of Protagoras, is not practical.