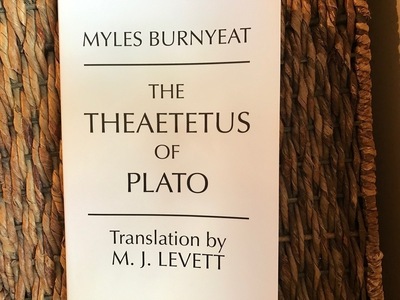 An Argument For Theaetetus’ Claim: Knowledge Is Perception

Written by KashifWasHerePosted on February 27, 2017April 5, 2017Leave a comment

Socrates’ claim that “things such as size or warmth or whiteness belong neither to the object we measure ourselves against of touch or to we who are doing the measuring or touching” (154b) is a result of taking Heraclitean and Protagorean ideas to their logical extremes. Moreover, in this conclusion, Socrates combined the Heraclitean theory of flux with Theaetetus’ claim that “Knowledge is Perception” (151e), and the Protagorean Man-Is-The-Measure doctrine. These three theses are combined together to properly capture Socrates’ understanding of perception and to make Theaetetus’ view of knowledge as perception plausible. Socrates alters Theaetetus’ initial suggestion because the claim that knowledge is just perception is a self-defeating statement.

Theaetetus proposes that knowledge is just perception because he believes knowledge consists of two essential features; namely, that knowledge is unerring and incorrigible. Moreover, Theaetetus thinks that knowledge is about what is. Socrates immediately follows this claim of Theaetetus by comparing it to Protagoras’ assertion that “man is the measure of all things” (152a). Socrates does this by showing that Protagoras’ ‘man-is-the-measure’ doctrine means the same as “each thing appears to me, so it is for me, and as it appears to you, so it is for you” (152a). Socrates goes on to show that “it appears” (152b) means the same as, “he perceives it” (152b). All of this is done by Socrates to show that perception is unerring, which satisfies one of the necessary requirements for knowledge. Moreover, this is done in an attempt to make Theaetetus’ initial suggestion that knowledge is just perception more plausible.

A necessary consequence of Protagoras’ doctrine is that “there is nothing which in itself is just one thing” (152d). This means that no object can be objectively described as ‘big’ or ‘small’, because said object is either ‘big’ or ’small’ relative to the perceiver. ‘Big’ or ‘small’ are properties that do not exist in the perceived object, according to the Protagorean doctrine. Thus, nothing ever objectively is any of these things; rather, as Socrates puts it, “everything is coming to be” (152e) depending on the perceiver.

As a result of the fact that “everything is coming to be” (152e) depending on the perceiver, and in a continued attempt to make Theaetetus’ initial suggestion even more plausible, Socrates combines this idea of being with the Heraclitean theory of flux by positing, “being (what passes for such) and becoming are a product of motion” (153a). Socrates lays out several arguments in support of this claim. For instance, Socrates cites the fact that “heat and fire, which presumably generates and controls everything else, is generated out of movement and friction — these being motions” (153a). Socrates also cites the fact that “the growth of living creatures depends upon these same sources” (153b), that “bodily condition deteriorates with rest and idleness” (153b), and that the condition of the soul “gains knowledge by learning and studying” (153b). These examples show that “being and becoming are a product of motion” (153a) — that how something is or appears to be is unique to that moment; it is the unique result generated by contact between perceiving subject and perceived object. As a result, Socrates concludes, “what you would naturally call a white colour is not itself a distinct entity, either outside your eyes or in your eyes. You must not assign it any particular place; for then, of course it would be standing at its post; it wouldn’t be in process of becoming” (153e). This passage means that the type of properties that can be abstracted from an object without impacting the essence of the said object has neither a spatial location nor a location in time. If these types of properties (properties such as color) did have a spatial location and a location in time, then no unique moment between perceiving subject and perceived object would occur; thus, the properties would not be relative to the perceiver — they would be objective.

On these grounds, it necessarily follows that the properties that can be abstracted from an object, without impacting the essence of said object, properties such as size, warmth, and color, neither exist in the perceived object, nor in the individual perceiving the object. This is what Socrates means when he says that “things such as size or warmth or whiteness belong neither to the object we measure ourselves against of touch or to we who are doing the measuring or touching” (154b).

Lastly, Socrates demonstrates that holding onto the notion that perceived properties belong to either the perceived object or the subject perceiving forces one into saying “the most astonishing and ridiculous things” (154b), which he accuses Protagoras and Heraclitus of doing. Socrates demonstrates this error in thinking via a dice example. In this example, there are six dice. Four dice are placed next to these six dice. Thus, these six dice become ‘more’ than the four dice. Furthermore, if one places twelve dice next to the original six dice, the six dice then become ‘less’ than or ‘half’ of the twelve dice. The dice example illustrates an obvious case of a property that comes into being (or becomes) only within a particular context. In the particular case of the dice, the dice become ‘more’, ‘less’, ‘half’, and ‘double’, relative to the other dice. ‘More’, ‘less’, ‘half’, and ‘double’ are relative terms. The dice example demonstrates that properties of being, ‘more’, ‘less’, ‘half’, and ‘double’, belong neither to the object perceived nor the subject perceiving involved in any particular perception. Moreover, the dice example shows that properties of being do not have stable being, nor do they belong in any enduring fashion to anything; rather, the properties come about — meaning, the properties become.

By demonstrating that perception is private and properties, such as size, warmth, and color, are not in any particular place — rather, these properties become — this strongly suggests that the objects of knowledge are immediate sense data (perception). Thus, by adding the Protagorean doctrine and the Heraclitean doctrine to Theaetetus’ initial suggestion that knowledge is just perception, Socrates has made Theaetetus’ view plausible.